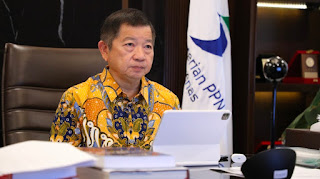 "In addition to being an integral part of SDI, based on the mandate of Presidential Regulation Number 23 of 2021, One Map resulting from the acceleration of the implementation of KSP will also be integrated into One Indonesian Data," said the Minister.

The Minister said was proud to be a party that contributed to the acceleration of the implementation of KSP activities. Based on the results of the One Map Policy achievements from 2016 to 2020 summarized by the Secretariat of the One Map Policy Acceleration Team, the data compilation process has reached 100% for 85 thematic maps from 24 Ministries/Agencies and 34 Local Governments.

"At the integration stage, the achievement of results shows that it is still not 100%, with the progress of each island being different. Meanwhile, at the Synchronization stage, an Indicative Map of Overlapping IGT (PITTI) has been compiled which shows that there are still 40.6% or around 77,365,141 hectares of areas experiencing overlapping problems, "he said.

The Minister also explained that the Thematic Geospatial Information (IGT) as a result of the integration of PKSP which is shared through Geoportal has now begun to be used to support national programs/policies, especially those based on spatial.

Closing his remarks, the Minister hopes this access can be shared and utilized as well as possible to all government agencies and even the general public, with still following the rules/stipulations regarding the process of using various data. (Rel)